‘The Titan Games’ EP Arthur Smith On Building The Titan Arena, The Largest Outdoor Structure Ever Created For An Athletic Competition Series 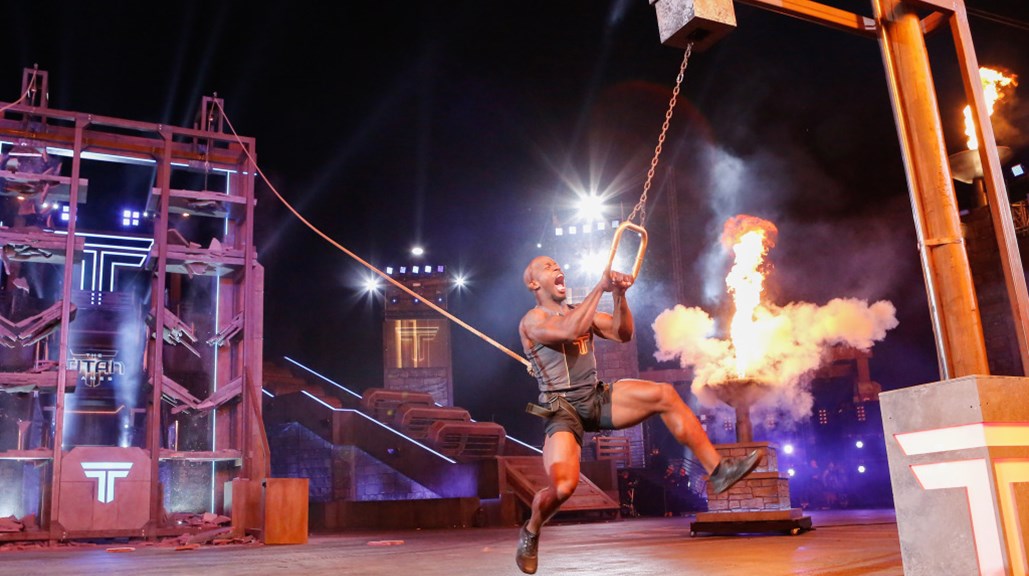 An executive producer behind the American Ninja Warrior franchise and Hell’s Kitchen, Arthur Smith is always looking to break the mold and push limits within the reality competition space, doing so most recently with NBC’s The Titan Games.

Co-created by A. Smith and Dwayne Johnson, who also serves as host, and developed by NBCU, the series is a groundbreaking athletic competition, featuring challenges with names like “Atlas Smash” and “Herculean Pull,” inspired by Johnson’s own workouts. An inspiring competition amongst everyday athletes, The Titan Games’ focus is on those who are well rounded, bringing much more than just strength to the table.

Like the athletes competing to claim the title of Titan, Smith was tested on The Titan Games, enduring intense night shoots and endless logistics. In the process of bringing together the show, the CEO of A. Smith & Co. Productions would also build the Titan Arena, the biggest outdoor structure ever created for an athletic competition series.

How did The Titan Games come together with Dwayne Johnson as host? What was it that you were looking to do with this show?

We have this great relationship with NBC that has matured over the years, with this great collaboration on Ninja Warrior, so we had been in conversations with them of, “What’s the next thing? Is there another great athletic competition?” We started developing ideas with them, and we were very careful about that. Obviously, something in the athletic space would be compared to Ninja, but we wanted to do something completely different. We finally got to a place where we thought we had something special, and they agreed. Then, we were talking about, “Who is the best person to front this, and work with on this?” There was one name at the top of the list, and that was Dwayne Johnson, of course, who embodies everything that we wanted The Titan Games to be.

Now, Dwayne, because of what he does, who is—[with his] 130, 135 million Instagram followers—is always talking about inspiring people. He’s always talking about blood, sweat, respect, about his approach to life, being the hardest worker in the room. So, he had been thinking about something along the same lines, and when we went to him, the timing couldn’t have been better. Dwayne is a very busy man, has a phenomenal career. It keeps getting better and better. He’s at the top of his game, and we didn’t think it [would be] possible, but he was so into it right away.

This spoke to him, because of what he does and what he preaches, and he loved the idea of giving an opportunity for everyday people to become superheroes. It’s kind of the story of his life, where he came from—a former football player who got into wrestling, and then took it to the next level, and then his career as a superstar. So, we kind of took what we had developed and what he was thinking about and just blended it all together. It was two independent ships that kind of crossed in the night, but it felt like the type of project that would attract him.

He was very involved in the making of the show, and was more than just the host. I always call him “The Commissioner.” He was very vested in the people, and our desire was to do something epic, something that would never have been done before, in terms of scale—all original challenges that had never been seen on television before.

So, it’s been quite the epic adventure. I’ve been producing for a long time; I’ve been part of three Olympic Games and I’ve done some very big shows, and this was definitely one of the most ambitious projects that I’ve ever been a part of. It was grueling and hard, but well worth it.

Could you elaborate on the concept and visual presentation that made The Titan Games stand out in the reality space?

One of the things that we first established was, “What does a ‘Titan’ mean?” And a Titan is someone who is strong first, but is not just strong, who has to be a well-rounded athlete. We wanted to make sure that if you were going to be successful at Titan Games, every part of your physical prowess was on display. You have to be strong; you have to be fast; you have to be quick. And Mount Olympus, which is where we crowned our Titan champion, was the embodiment of all of those things.

Now, Mount Olympus was created because every challenge leaned into different attributes than others. Some leaned heavily into strength, and some were a combination of strength and balance. The thing is, you may have beaten somebody by virtue of your strength in an earlier challenge. But once you got to Mount Olympus, you had to be good at everything. So, Mount Olympus was this last check to make sure that we had worthy people moving on to the “Battle of the Titans,” which was our second-to-last episode, and then “The Titan Championship.”

What was the process like, in bringing the show’s challenges to life?

It really just [amounted to] breaking down the types of things that Dwayne was doing in his workouts, but we had to make it TV-friendly. The challenges had to be compelling television. But when we looked real hard at what he was doing and what we were thinking, it was like the marriage of this crazy brain trust. I mean, challenge development was insane; it really was. We must have developed well over 100 challenges to get to the 12 to 15 that we had on the show. We went through testing and prototyping, and had sports scientists come in, [assessing] what muscle groups they’re using. It wasn’t like, “Oh, this works. This looks good on TV.” It really was to make sure that the best athlete won.

We did a combine, which was part addition and part evaluation, where we brought in the top 100 finalists, and we were measuring pulse, heart rate, leaping ability, speed, and every possible thing. It was the coolest thing. It was like a lab, where we had all this data we were compiling. Then, of course, we did interviews—more in-depth interviews than the ones we did originally—and from that, we got down to our 64. So, we were very careful in terms of what the challenges would be, what they would test, and the type of athletes that would come on there.

Then, of course, story is so important. I mean, the guy who won “Titan Champion” is a Budweiser truck driver, and that’s what we wanted The Titan Games to be, everyday people who are extraordinary athletes—“everyday people,” meaning everyday jobs. They’re not pro football players or whatever; one of them was a trauma nurse who worked a 12-hour shift, and trained for two hours a night. It really was this showcase for all these wonderful athletes that nobody knows, these people that work out and don’t have a place where they get to strut their stuff.

Together, the Titan Arena and Mount Olympus comprise the biggest outdoor structure ever built for a reality competition, so large that it couldn’t fit on the Universal Lot. The construction of that space must have been a remarkable project to oversee.

Yeah. Mount Olympus is seven stories, and the compound was five or six acres. We wanted to do it in the LA area, and we were trying to find the largest piece of flat land out there. Because some of the challenges are so big that you have a place to store them, and they have to be wheeled in and out. The best place that we found was in Irwindale, where the Irwindale Racetrack is, because their parking lot is massive. Being on location and seeing these massive things coming onto the stage was epic, and there was an energy in that Titan Arena, which was also quite incredible. Here we are, you know? A couple of months before, it was a parking lot—and then it was a Titan Arena. It was quite exciting, and I know even Dwayne, the first time he stepped on it, went, “Oh my god!” It’s one thing to look at things when you’re sketching them out, and [another] to see it in reality. With size and scale comes complexities and challenges and logistics, but thankfully, it came together.

Like Game of Thrones’ epic “Battle of Winterfell,” The Titans Game was shot over the course of many nights. Did capturing its intense athletic battles in night shoots bring its own set of challenges?

Certainly, it was challenging for everybody involved, but we wanted it to look a certain way. We knew that to be on prime time, it had to have that glow, and that special, magical feel could only happen at night. It was also challenging because Dwayne has a busy schedule and we had to get it done in certain amounts of time, so our shift was, we’d start getting ready around 7 and shoot around 8 o’clock at night, and finish at 4 or 5 in the morning. But that’s just the shooting of it. There’s the writing, and the developing, and the testing, and the orientation, and the interviews. So, I lost nine pounds—and I was eating! Just from not sleeping, and the energy of being up.

Listen, it was hard. The athletes, they’re our participants. We did our best in looking after them—whatever they needed to be comfortable and looked after—and they had to shift around their bodies. What do you do? You sleep during the day, and you try and get ready for the waking hours. I don’t think their athletic performance suffered because of it. I thought everybody brought their best game. But it was hard, there’s no doubt.

NBC’s President of Alternative and Reality, Meredith Ahr, is clearly happy with the show’s performance, having spoken about turning The Titan Games into a global format. Is there anything you can say about what the future might hold for the series?

I can’t at this time, but we’re feeling very good about the future.

This has been another busy season for you. In addition to The Titan Games, you’ve debuted such popular series as Mental Samurai and Death by Magic. What about the recent work you’ve done has been most exciting to you?

For me, the greatest thing about working at a production company like ours is the diversity of programming. I like a lot of things, and I love what we do because it spans sports and entertainment, and all things nonfiction. Mental Samurai was a blast; we were trying to create an event out of a game show, and Rob Lowe did an amazing job. What I love about Death by Magic, the show that we did for Netflix, is that it was stylish, and that they traveled the world, with DMC [Drummond Money-Coutts] doing tricks that other magicians have died from, and then ratcheting it up. I love the cultural stuff, the episode in South Africa where he’s doing tricks for kids in the streets, and all the locations. I thought it really broke with tradition—what we expect from a magic show.

America Ninja Warrior Junior got nominated for a Daytime Emmy, which we were really happy about. We’re going to shoot Season 2 in July, and what’s happened with Ninja is more than a television show. It’s a movement. It’s everywhere. Of course, Ninja debuted last Wednesday, and it’s an unbelievable season. There are some great things coming up.