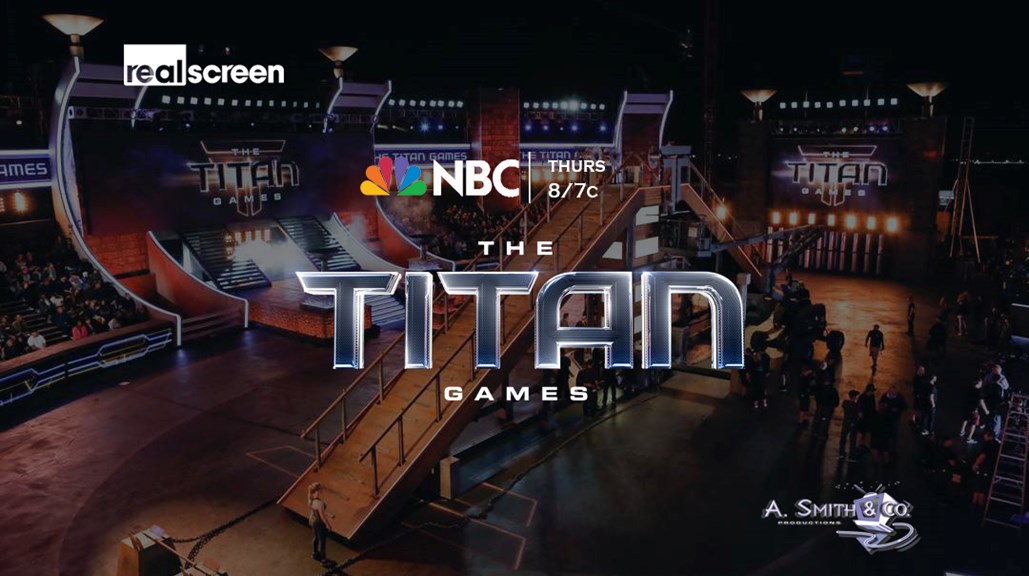 Dwayne “The Rock” Johnson is sure to inspire viewers to get up off the couch following a holiday season chock full of feasting and eating in NBC’s new athletic competition series The Titan Games.

Produced by A. Smith & Co. Productions in association with Universal Television Alternative Studio and Seven Buck Productions, The Titan Games is a 10-episode series that sees competitors navigate through a variety of head-to-head challenges aimed at testing the mind, body and heart. Those who can withstand the challenges have the chance to become a “Titan” and take home the grand prize of US$100,000.

The champions – one man and one woman – will be crowned the overall Titan.

The Titan Games sits on a six-acre compound that took four weeks to construct. The Titan Arena stands nearly 70-feet tall and features challenges up to 32-feet tall.

Realscreen caught up with executive producer Arthur Smith to learn more about the series, which premieres tonight (Jan. 3) at 8 p.m. ET/PT on NBC.

The following interview has been edited for clarity and length.

What was the genesis behind The Titan Games?

Over the last several years, we’ve had a great collaborative relationship with NBC on American Ninja Warrior, which will soon begin production on season 11. A couple of years ago, we began discussion and development for the next great sports entertainment athletic competition. Perhaps through fate, at the same time, Dwayne was developing a platform for everyday people to become superheroes. We couldn’t think of a better person to be the face and spirit of such a massive undertaking, so we jumped at the chance to partner with Dwayne to create what is now The Titan Games.

How does the program differ from other physical competition series like America Ninja Warrior?

The Titan Games is a series of grueling head-to-head challenges, while American Ninja Warriorpits person versus obstacle course. On Titan Games, the athletes who are the most successful are outstanding all-around athletes who combine strength, speed, agility, and heart. In every episode, we crown one male titan and one female titan. At the end of the season, the Titans battle it out to determine which one male and one female will be crowned Titan Champion.

What production challenges did you face onThe Titan Games?

Designing something of this magnitude invariably comes with logistical hurdles. Challenge development was exhaustive as we strove to create original competitions that test our athletes’ physical and mental limits and overall ability in ways they’ve never been tested before. The size, scope, and complexity of these challenges were so massive that it was difficult to find a place to put it all in. So, we built the Titan Arena and the seven-story Mt. Olympus on a six-acre compound just outside of Los Angeles.

What is unique to the series that will capture an audience’s attention?

I know people will be amazed at the athletic ability of these everyday people. These are people who work 12-hour shifts as trauma nurses and truck drivers, and then go and train in the gym for three hours every day. Each episode, viewers will witness a series of compelling, one-on-one, hard-fought battles to see who has what it takes to be crowned a Titan. While the victories are emotional celebrations, viewers will also be truly impressed by the camaraderie of our athletes.